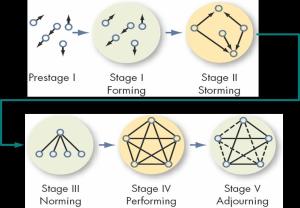 Effective teamwork is essential in today’s world, but as you’ll know from the teams you have led or belonged to, you can’t expect a new team to perform exceptionally from the very outset. Team formation takes time, and usually follows some easily recognizable stages, as the team journeys from being a group of strangers to becoming a united team with a common goal. Whether your team is a temporary working group or a newly-formed, permanent team, by understanding these stages you will be able to help it quickly become productive.

As a team leader, your aim is to help your team reach and sustain high performance as soon as possible. To do this, you will need to change your approach at each stage. The steps below will help ensure you are doing the right thing at the right time.

Key Points
Teams are formed because they can achieve far more than their individual members can on their own, and while being part of a high-performing team can be fun, it can take patience and professionalism to get to that stage. Effective team leaders can accelerate that process and reduce the difficulties that team members experience by understanding what they need to do as their team moves through the stages from forming to storming, norming and, finally, performing.